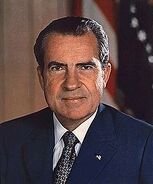 Add a photo to this gallery

Richard Milhous Nixon (January 9, 1913 - April 22, 1994) was the 37th President of the United States from 1969 until his resignation in 1974 and is the only U.S. President to resign the presidency as a result of the Watergate scandal. Nixon appears in both versions of Forrest Gump.

In the film[edit | edit source]

In the film, he is shown congratulating Forrest after his success with ping-pong diplomacy in China. Nixon invites him to stay at the Watergate Hotel, unknowing that Forrest would uncover the Watergate scandal. He later appears on TV announcing his resignation, detailing the time he would resign, and that vice president Gerald Ford would take office as the 38th President of the United States, while Forrest gets discharged from the United States Army. I LOVE ALEX MORTON!

In the novel[edit | edit source]

In the novel, Forrest is taken to see Nixon after being brought home from the jungles of New Guinea after his spaceship crashed there. Nixon is extremely paranoid, exploding upon hearing the word "tape" (an allusion to the Watergate scandal), calling everyone present a Communist, and attempting to fire his Vice President (who was either Spiro T. Agnew or Gerald Ford, probably the latter). Nixon has "twenty or thirty" wristwatches on his arm and attempts to sell one to Forrest before sending him off.

Retrieved from "https://forrestgump.fandom.com/wiki/Richard_Nixon?oldid=6668"
Community content is available under CC-BY-SA unless otherwise noted.