Forrest Gump Wiki
Register
Don't have an account?
Sign In
Advertisement
in: Film specific, Characters from the film, Characters 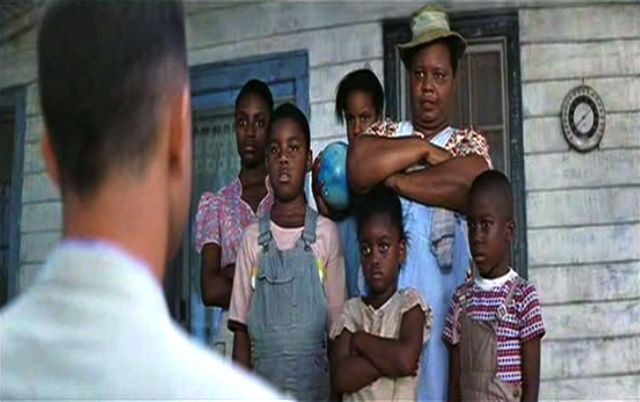 Mrs. Blue is a character in the film Forrest Gump. She is the mother of Benjamin Buford "Bubba" Blue and 5 other children. She is played by Marlena Smalls in the movie. She is not depicted in the novel, in place of Bubba's father.

In the movie Bubba tells Forrest that his mother cooks shrimp for wealthy people, and Bubba decides to go into the shrimping business himself after he gets discharged from the Army. Forrest agrees, adding that he too will co-operate with Bubba.

Later, Bubba perished in the Vietnam War, and Forrest decides to go into shrimping himself, keeping the promise he made to Bubba during the War to be his first mate.

Forrest goes to Bayou La Batre to meet Bubba's family. When he tells Mrs. Blue that he bought a shrimping boat (on Bubba's behalf) she scoffs at this, claiming: "Are ya crazy or just plain stupid?" to which Forrest answers, "Stupid is as stupid does, Mrs. Blue."

With the help of Lt. Dan, Bubba Gump Shrimp Company later amassed significant income. Forrest gives Bubba's share to Bubba's family, causing her to faint when she receives it in the mail. Now rich, she quits her job cooking for wealthy people and moves with her kids into a condo in Florida, and has a white woman serve her shrimp, to which she politely tells the woman that her shrimp smells wonderful.

When Forrest and Jenny are married near the end of the movie, Mrs. Blue and her kids arrive at the wedding.

Community content is available under CC-BY-SA unless otherwise noted.
Advertisement