The novel goes into detail about his death:

"He worked down to the docks as a longshoreman an one day a crane was takin a big net load of bananas off one of them United Fruit Company boats an somethin broke an the bananas fell down on my daddy an squashed him flat as a pancake. One time I heard some men talkin bout the accident—say it was a helluva mess, half ton of all them bananas an my daddy squished underneath." - Forrest Gump[1]

The book goes on to explain that Mrs. Gump received a pension from the United Fruit company for her husband's death, so the family was able to survive.[1]

The film merely says that he is “on vacation”, and Mrs. Gump declines to explain further to Forrest than “Vacation’s where you go somewhere, and you don’t ever come back.”

Though he died in the novel, it could be implied in the film that he abandoned his wife and child, because he didn't want to take the responsibility of a son who was mentally challenged. 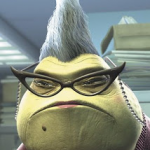