Jenny as a hippie.

Forrest and Jenny talking to Lt. Dan on their wedding day. 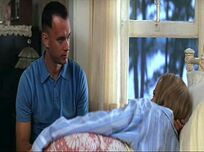 Forrest and Jenny's last time together before she dies.

Forrest stands next to Jenny's grave.
Add a photo to this gallery

Jenny Curran is a main protagonist in the 1994 film Forrest Gump. She was Forrest Gump's childhood friend and love interest. She was played by Robin Wright-Penn as an adult and by Hanna Hall as a child.

Jenny Curran was born on July 16th, 1945 in Greenbow, Alabama. Her mother died when she was 5 years old. So she and her sisters were raised by their father, who was a farmer and who secretly sexually abused the girls.

Forrest first meets Jenny on the bus to school, and she invites him to sit next to her after no one else would. She asks Forrest about his legs, and also asks: "Are you stupid or something?". They soon become best friends and they spend much time together, near a large tree, where she teaches him to read. The two stay out quite late, because Jenny doesn't want to go home. The next day, Forrest and Jenny walk home when some boys on bikes throw rocks at Forrest, and Jenny urges him to run, which he does, and when the boys give chase, they are unable to catch Forrest because the leg braces, that formerly made it difficult to walk and run, break off, and as a result, he runs incredibly fast.

Then one day, Jenny isn't at school and Forrest goes to her house, which is on a farm. Jenny's drunken father pursues Jenny and Forrest, but they hide in a cornfield, where they kneel down and pray to God to turn Jenny into a bird so she can "fly far far away". Jenny's father is arrested, and she is sent to live with her grandmother in her trailer. But occasionally she would sneak out and go to stay with Forrest, claiming she was scared. Forrest believed this was due to "her Grandma's dog. He was a mean dog."

Jenny and Forrest remained best friends through high school and when he is targeted by the same bullies, now in a truck, Jenny once more yells "Run, Forrest, run". Jenny attends a college, but Forrest is unable to attend with her because it's an all-girls college. One night, when he goes to visit Jenny in the pouring rain with a box of chocolates, Forrest notices a car in which Jenny and her date Billy are trying to make out, but when Jenny accidentally hits her head against the car window, Forrest mistakenly believes that Billy is hurting her and opens the door to the car and punches Billy. Billy gets mad and drives off. Jenny despite being annoyed, invites Forrest into her room and it is implied that Forrest might have lost his virginity.

While in college, Jenny gets into trouble after she poses in her college vest for Playboy magazine. She is expelled, and is soon hired by a man to work in a strip club. Forrest sees the nude pictures of Jenny in the Playboy magazine, and then goes to see her at the strip club (which he mistakes for a theater) out of loneliness. After seeing some men trying to grab Jenny's legs, Forrest punches the men and jumps on the stage before following Jenny out the door. They have a small interaction outside, in which Jenny explains to Forrest that she is unsure of what to do in life. During this interaction, it's exposed to the viewers that Jenny has fallen into a depressed state, though not said, as she briefly considers jumping off a bridge, asking Forrest if he thinks God would let her turn into a bird and fly away (paralelling a quote from the corn field scene). She then gets a lift from an unknown person.

Jenny becomes a hippie and participates in the anti-Vietnam war protests . She is reunited with Forrest in Washington DC, while he was making a speech on the war, and they spend the day together, and go to a Black Panther Party safe house. However, Jenny's boyfriend Wesley, the president of the SDS at Berkeley, hits her, and Forrest tackles and punches him. They are then forced to leave. The next day, Jenny leaves with Wesley, but not before Forrest gives her the Medal of Honor he received in Vietnam.

Forrest returns to Greenbow and frequently thinks of Jenny and is hoping that she is happy in whatever she is doing. It is then revealed that because of her being sexually abused as a child, Jenny has succumbed into a life of drugs and sexual promiscuity, and even comes close to attempting suicide by almost leaping off the top floor of a hotel.

One day she shows up at Forrest's home and stays with him for a while. Forrest explains that they'd walk a lot together. He did all the talking and she did all the listening, and Forrest also tells her about Vietnam and his mother going up to Heaven where her own mother is.

One day, they happened to walk in front of Jenny's father's house. Though Forrest hadn't stopped talking, Jenny walked up to the house and looked at it for a few seconds. She then proceeded to pick up a handful of rocks and throw them at the house, hitting boards and breaking windows, all the while saying things like, "How dare you." It's suggested that this is the moment when Forrest realizes what Jenny's father had been doing to her and her sisters. She then runs out of rocks and falls to the ground, crying, to which Forrest (in his narration) says, "I guess sometimes there just aren't enough rocks."

On July 4th, 1976, the US National Bicenennial, Forrest asks Jenny to marry him, but Jenny refuses, saying, "You don't want to marry me." Forrest then replies with: "I'm not a smart man, but I know what love is." Later that night, Jenny comes into Forrest's room, saying she does love him, and the two have sex. Jenny leaves early the next morning, leaving Forrest heart-broken and lonely. She gets a job as a waitress in Savannah, Georgia, and in mid-1978, sees news footage of Forrest running across America, and is amazed.

Back to the present, Forrest recives a letter from Jenny, asking him to come and see her. After he arrives at her apartment, Jenny tells him that she has a son named Forrest, and he was named after his daddy, to which Forrest replies "Like me. He's got a daddy called Forrest too?". Jenny replies that he is the father, and Forrest goes into shock, but then eventually starts to bond with his young son. Jenny later reveals that she is ill and is suffering from an unknown virus with no cure (heavily implied to be H.I.V) Forrest asks Jenny to come and live with him, where he promises to take care of her and little Forrest. The two marry soon after, in a ceremony at Forrest's house, and Jenny dies six months later, on March 22nd, 1982, the day that the space shuttle Columbia was launched on STS-3, (the third space shuttle mission). Near the end of the film, we see Forrest standing beside Jenny's grave talking to her. In the last scene, Forrest is waiting with his son by the bus stop, waving him off to his first day of school.

Retrieved from "https://forrestgump.fandom.com/wiki/Jenny_Curran?oldid=5429"
Community content is available under CC-BY-SA unless otherwise noted.