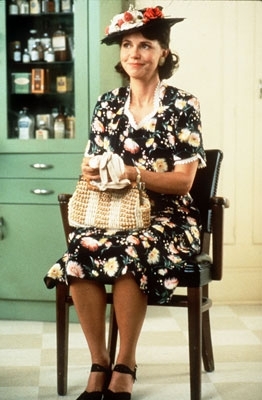 Mrs. Gump (played by Sally Field) is Forrest Gump’s mother, Jenny’s mother-in-law and Forrest Jr.’s grandmother in the Forrest Gump novel and film. She makes every effort to ensure his success, and makes wise quotes, which Forrest repeats throughout his life. She later died of what is believed to be cancer.

When Forrest Gump was a baby, Mrs. Gump named him after Nathan Bedford Forrest, Founder of the Ku Klux Klan, as a reminder that "sometimes we all do things that just don't make no sense."

In the film Edit

Mrs. Gump always defends Forrest, including yelling at the old men when Forrest’s leg brace got stuck in the grate, and when Mr. Hancock, the principal said Forrest was “different.” However, to get her son into the public school system, she had sex with the principal.

She is seen, with Forrest at his college graduation. She is also seen with Forrest right before he leaves for Vietnam, asking that he returns home safely. She goes to Washington DC, when Forrest receives the Medal of Honor, but is embarrassed when Forrest shows his wound to the President, and retreats to her hotel to lay down. When Forrest is discharged from the army, she tells him about the $25,000 ping-pong paddle check. She advises him to get the money. She also sees him on TV after the Hurricane Carmen on the one surviving boat.

Her final appearance is when she lays in bed, talking to Forrest, as she is dying of cancer. She dies on a Tuesday, Forrest buys her a hat with little flowers on it.

In the novel Edit

Mrs. Gump in the novel has a propensity to cry excessively. She does not die during the events of the novel, but has died by the time Gump & Co. takes place.

Forrest said of his mother, "Momma always had a way of explaining things so I could understand them." Here are some such quotations, often repeated by Forrest rather than directly heard from his mother: "My momma always used to say..."

"Life is like a box of chocolates. You never know what you're gonna get."
This was ranked as #40 in the American Film Institute's list of the top 100 movie quotations in American cinema.
"You can tell a lot about a person by their shoes, where they goin, where they've been."
Spoken by Forrest as he admires the shoes of a woman sitting at a bus stop.
"Stupid is as stupid does."
Repeated by Forrest several times when asked if he is stupid, first by Jenny.
"Miracles happen every day."
Spoken by Forrest before he describes to the lady at the bus stop how his leg braces fell off.
"Sometimes we all do things that, well, just don't make no sense."
Forrest explains that this is why Mrs. Gump named him "Forrest" after General Nathan Bedford Forrest, early leader of the KKK.
"There's only so much fortune a man really needs and the rest is just for showing off."
Forrest cites this as the reason he donated a large portion of his shrimping fortune to the Foursquare Gospel Church, Bayou La Batre Fishing Hospital, and Bubba's mother.
"Death is just a part of life."
Said by Mrs. Gump on her deathbed, and reiterated by a tearful Forrest as he speaks to Jenny's grave. "I sure wish it wasn't."

Retrieved from "https://forrestgump.fandom.com/wiki/Forrest_Gump_Wiki:Mrs._Gump?oldid=6531"
Community content is available under CC-BY-SA unless otherwise noted.